by Donald Jeffries, Keeping It Unreal: 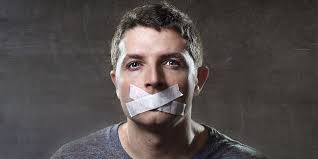 I became politically aware as a teenager in the mid-1970s. It was a different country, and a different world. America 1.0, as I like to call it. I gravitated naturally to the far Left side of the political spectrum. I was against all war. I thought the poor were getting a raw deal. I didn’t think blue-collar workers were being paid enough. I felt sympathy for the unjustly convicted and opposed the death penalty. I thought marijuana should be legalized. I believed our leaders should be focusing on the many domestic problems, instead of senseless foreign intervention.

Most importantly, I became a civil libertarian. Patrick Henry’s words, “I may not agree with what you say, but I’ll defend to my dying day your right to say it” resonated with me almost as much as Huey Long’s great “Share the Wealth” speeches. I was also influenced by Hugh Hefner’s Playboy Philosophy, which talked about “victimless crimes” and ignited my libertarian streak.

I thought the Democrats, or most of them, were the good guys. I cast my first vote for Jimmy Carter, even though I liked almost all the other party presidential candidates better. I really liked Frank Church, especially when he headed the first congressional investigation to expose the abuses of the Central Intelligence Agency.

It didn’t take long for me to become more politically mature. I grew to understand that most of the social programs created additional costly bureaucracies, and didn’t seem to provide much help to those who needed it. Once the Vietnam War finally ended, I began to notice that most Democrats were just as pro-war as most Republicans.

The election of Bill Clinton in 1992 signaled the end of the old “liberalism,” which had drawn me to politics in the first place. Clinton was the first politician to make a habit of virtue signaling rhetoric, in which he could “feel your pain,” but his “reforms” resulted in poor people getting less financial aid for shorter periods, and convicted more largely Black people of “victimless crimes” than ever before. His myriad of personal and political scandals made Richard Nixon, whom I had considered the ultimate villain in my youth, look like Thomas Jefferson.

Clinton was the first to co-opt the term “liberal” without adhering to any of the classic tenets of liberalism. He didn’t overtly support the unions that were even then largely impotent. He didn’t demand higher wages for average workers, or criticize the incredible growth of CEO compensation, often accompanied by large layoffs. He lobbied hard for the passage of NAFTA, one of the deadliest pieces of legislation in our history, and never batted an eye at the outsourcing and offshore factories that followed.

Bill Clinton might have bombed Kosovo, and helped consolidate the media into a  handful of huge corporations, but he could speak identity politics fluently. And that’s all that mattered to his base, which were being converted from empathetic, traditional liberals fighting for the little guy into authoritarians concerned over the views of those they opposed.

By the time Barack Obama arrived on the scene, he was treated like a male, biracial Mother Theresa by a fawning media and an even larger constituency indoctrinated for years by the virtue signaling professors that were already dominant in every major university. Obama was celebrated for what he was and how he looked, not for his political beliefs or principles. He was perhaps even better at feeling others’ pain that Bill Clinton was. But he too proved to be adept and bombing and even killing others, which he actually bragged about. And his supporters loved it.

The election of Donald Trump triggered something deep inside all of those now mature Social Justice Warriors, who’d been born under Clinton and climbed to positions of power under Obama. We see them now as the mayors and police chiefs of all the cities being besieged by looting, who have no desire to stop it.

The classical liberals, inspired by the likes of Thomas Jefferson, Thomas Paine, Patrick Henry, Charles Dickens, William Jennings Bryan, Huey Long, and John F. Kennedy, are now all but gone from public life. Some of my friends, like peace activist Cindy Sheehan and former Rep. Cynthia McKinney, try their best, but no one on the left is interested in marching for peace now. Or protecting civil liberties. Sheehan and McKinney aren’t going to be welcome at the Democratic convention.

Instead, “liberals” today largely consist of often deluded Social Justice Warriors. They think and act with emotion, not reason. Their primary goal doesn’t seem to be fighting for the rights of those who’ve been denied them, but to take away the rights of those they disagree with. They don’t remotely believe in the Bill of Rights, especially the First Amendment. How many people have been fired recently, for posting a comment on social media, in their free time, which offended these Social Justice Warriors?

These poor souls are forced into public acts of contrition, but still lose their jobs, anyway. Why they still apologize for exercising their constitutional right to free speech is beyond me. The virtue signalers whose loud complaints got them fired, feel no remorse. No sense of guilt over families thrown into financial turmoil, especially in this unprecedented fragile economy. The new Left doesn’t care about the unemployed, especially if they disagree with them politically. It makes them feel good to see someone that offended them fired. That’s the essence of identity politics.

It doesn’t take much for Social Justice Warrior to demand someone’s termination. A pro soccer player was recently cut by his team for comments his wife made on Twitter. The stepmother of one of the officers involved in the shooting of the man found asleep in a Burger King drive-through was fired. For being  his stepmother. Others have lost their jobs for uttering undeniable truths like “all lives matter.” When that is considered not only controversial, but a fireable offense, then we have reached the heights of lunacy.

I am very active on social media. For celebrating Roger Stone’s commutation, I was blasted by some who had been big fans of my work. One person told me Stone should be shot for treason. Another said he should be hanged. Someone else said no one deserved prison more than him, and that he should be given a life sentence. For contrived process crimes, and a politicized prosecution in a kangaroo courtroom? So Stone deserves prison more than serial killers and child rapists?

I had much the same reaction for posting what I considered very good news, about embattled Kentucky teenager Nicholas Sandmann winning an undisclosed out of court settlement from the Washington Post. A good cyber friend, whom I respect greatly, called him a name and said he should “have his teeth kicked in.” Others called the teenager a “racist.” Clearly, that MAGA hat triggered them. They don’t need much triggering, but this red hat sets Social Justice Warriors off like nothing else.

The irrational hostility of these authoritarians who have commandeered the political Left is centered on Donald Trump. The inner party members in George Orwell’s 1984, engaged in the “two minute hate” while viewing the image and hearing the words of the opposition leader known as Goldstein. Today’s Social Justice Warriors engage in a 24 hour hate against the image and words of Donald Trump.

There is a consistent anti-White theme to everything the Social Justice Warriors say, and advocate. While the vast majority of these virtue signalers are White themselves, that doesn’t stop them from blasting “White privilege” nonstop. The irony of a group like Black Lives Matter being only 16% Black has been lost on our largely dumbed down populace. These protesters and looters are largely angry Whites. Who or what is financing and supporting them ought to be of concern to investigative journalists, if we had any.

Tweet
Erin O’Toole and Derek Sloan at the #IPGdebate “No”: Trudeau contradicts decade of friendship alleged by Kielburger’s